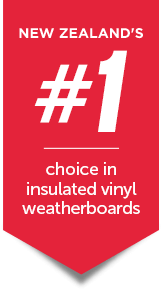 Our Vinyl Cladding has excellent performance characteristics in fire situations. This is because PVC has a high chlorine content. It ensures that it has a high resistance to ignition, and, is very flame retardant. PVC is generally also self extinguishing.

All organic materials will ignite. But the higher the temperature the material has to reach before it ignites, the safer it is. PVC will not ignite, even from another flame, until it reaches about 378°C, and will not self-ignite until about 454°C.

These ignition temperatures are much higher than common framing timber. Framing timber ignites from flame at 260°C and self ignites at 410°C.

Rigid PVC (vinyl cladding) will not sustain combustion in air with a normal concentration of oxygen, so it extinguishes easier. Vinyl products are slow to ignite, flame spread is slow, and it self extinguishes once the heat source is removed. The strong fire-safe characteristics of vinyl have been recognised for decades. Take even the Electrical industry, using PVC as an approved wiring insulator.

Results of  ASTM*-E162, show PVC as one of the materials with the lowest radiant panel index. This means it does not release a large amount of energy when it burns and will not readily spread flames on its own. The low rate of heat release is a significant factor in reducing injury in fire situations.

The byproducts of Vinyl combustion are no more hazardous than those produced by burning many other common materials - natural, and synthetic. Hydrogen chloride (HCl) is a byproduct of burning vinyl. Yet, it does not become dangerous until it reaches concentrations far higher than those that have been measured in actual fires. HCl air concentration declines rapidly in fires as it adheres to surfaces. Because it is an irritant with a pungent odor, HCl can serve as a warning to evacuate. Since the 70's the production and the use of vinyl building products have increased. Yet related fire incidence and deaths have declined.

Systematic investigations of large-scale accidental fires in Germany, Sweden, and Canada, have indicated that Dioxins will be produced in such fires, regardless of Vinyl being present. The quantities produced pose no threat to human health or to the environment. Individuals most exposed to fire gases showed low blood-dioxin levels.

In the tragic Victorian Fires of February 2009 in Australia, a Vinyl Clad house survived remarkably unscathed. The builder had spent considerable time researching building materials for:

Vinyl products impressed them over how they withstood the extreme conditions. The vinyl weatherboards escaped any significant damage. And, they protected the house from ember attack to the interior. A combination of factors saved the undefended house:

Each panel of weatherboard is very light, tough and very flexible meaning it will move with a building and not cause harm. It is installed t...

"Vinyl cladding is an incredibly versatile, durable and low maintenance material, and should be considered a front runner when considering cost-effective cladding.

Lightweight, it is extremely fast, and therefore cost effective, to install, and requires less scaffolding, and no need for further finishing on site."